The Crashing of Heaven and Hell 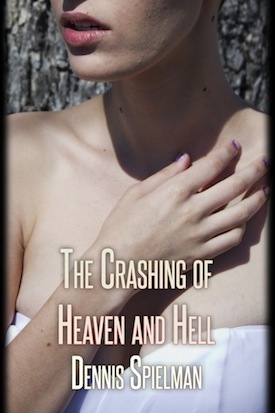 Two young lovers get caught up in a bizarre series of events through an act of human concern and kindness as they become pawns in a battle of the gods as a plot unfolds to unleash havoc on their planet when their Heaven and Hell comes crashing down.

Follow the normal lives of several people on the Green Planet as they deal with vengeful actors, kidnapping robots, making a documentary, a disappearing moon, scavengers in space, a zombie rights protest, and the Gods’ schemes to cause the planet’s heaven and hell to crash on the surface. Take an amazing journey on Hell’s wicked roller coaster, fly with angels in heaven, shop in a futuristic mall in the shape of a crystalline horse, run from a giant three-headed dog on a hoverboard, meet some fascinating people, and get involved in the Gods’ drama in Dennis Spielman’s book, The Crashing of Heaven and Hell.

“The day Dennis Spielman was born, there must have been a generous helping of imagination dished out, because the world he has created can only be related to our reality in a very general way!” ~ Dianne of Tome Tender

Buy The Crashing of Heaven and Hell
About the Author

Dennis Spielman is a filmmaker and writer whose most notable work is his travel and interview series, Uncovering Oklahoma. In addition to his travel series, he’s author of the 16th Phoenix Universe Stories, director of the feature length documentaries, District Up! and Uncovering Oklahoma Summer Fun, and has created several short films and music videos. He currently lives with his wife in Norman, Oklahoma with his three fur babies.

I want to thank all of those who had a hand in shaping and editing this book, especially Charmaine Muex, T.J. Schumann, Leah Kenkellerton, Jennifer Magnani, and especially my editor Garrett Marco. Your feedback was greatly appreciated. I would also like to thank Carolina A. Gonzalez for modeling for the book cover. Finally, thank you for reading this book. I hope you enjoyed the adventure and will follow me for many other stories.