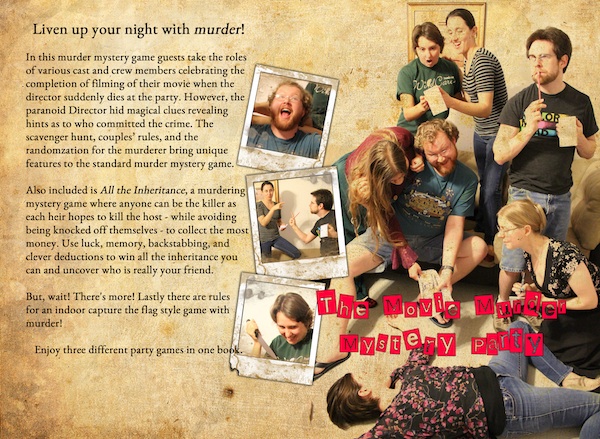 I’m excited to announcement the release of my party game book, The Movie Murder Mystery Party. The book is available as a paperback through CreateSpace and Amazon with the digital ebook versions to be released soon. I’m really happy about this release as it’s my first product that people can actually buy.

Liven up your night with murder!

In this murder mystery game guests take the roles of various cast and crew members celebrating the completion of filming of their movie when the director suddenly dies at the party. However, the paranoid Director hid magical clues revealing hints as to who committed the crime. The scavenger hunt, couples’ rules, and the randomzation for the murderer bring unique features to the standard murder mystery game.

Also included is All the Inheritance, a murdering mystery game where anyone can be the killer as each heir hopes to kill the host – while avoiding being knocked off themselves – to collect the most money. Use luck, memory, backstabbing, and clever deductions to win all the inheritance you can and uncover who is really your friend.

But, wait! There’s more! Lastly there are rules for an indoor capture the flag style game with murder!

Edited: A Flower for Virus