I have been having some powerful nightmares lately.

In the first nightmare I was trapped on an island where I was investigating this research station. I uncovered genetic experimentation that was turning people into monsters/zombies. I couldn’t find anyone that was still human to get answers. Inside one of the buildings, I found a hidden trapped door. I went down the ladder. It was a large, rectangular room with a dirt floor, concreate walls, and yellow florescent lights. The only thing in the room was down on the far opposite end. Resting in a wooden chair was this dead human body covered with thick spikes with a wooden bo staff in his lap. Around his neck was a golden key that I somehow knew I needed. I walked slowly towards the body. I kept thinking he was going to come to life as I took the key, but he didn’t. I ran back to the ladder only to have a wall slide down in front of it. I heard bones creek and crack as I turned around and saw the body come to stand. The bo staff he had somehow hand a large axe blade. I knew the only way out was to kill him. I ran at him. He swung his axe. I slide along the ground, picked up the chair, and stabbed him in the back with it. He dropped his axe and fell to pieces. The wall raised up and I ran out of there.

I remember bits and pieces of running and hiding in different locations. It was like a montage scene. There was also this sort of a puzzle I had to do using the key to lower the water level in order to get inside a research station. Where there was water there were zombies. This blond hair guy appeared and used martial arts to kill the zombies. We got inside and locked the door behind us. This guy was unnaturally strong and wanted my help, but in the nightmare I somehow knew he was the bad guy who caused all of this and I didn’t want to him. He was furious. He came, mutating his arm into a sword. I used a wet towel to smash up some tanks with body parts in them which caused pain to him. I ran out of the building and I woke up shortly afterwards being unable to escape at the edge of the island. This was at 5:30 a.m.

I managed to fall back asleep for a second nightmare. In this one, I was reunited with someone that I wanted to see. We met at a college. I was so happy. We tried to find a quiet place, but then the fire alarm went off. Students poured out of the buildings. I picked up the person I was with and flew. I had a bit of trouble flying, making sure not to hit the students as I couldn’t fly that high, but I got the person to safety. However, I needed to investigate the fire. I flew off and went into an empty cafeteria. People in black suits swarmed the windows and doors. The fire alarm was a trap to capture me for my powers. I flew away, but these FBI/MIB kind of agents kept chasing after me. I tried to hide in this black banner. They found me and wrapped me up in the banner and took me. Then I woke up.

Yeah…That was my night.

I knew these nightmares weren’t ordinary that I’ve been having lately, so the night before I had set up my camera. This is the image I captured. 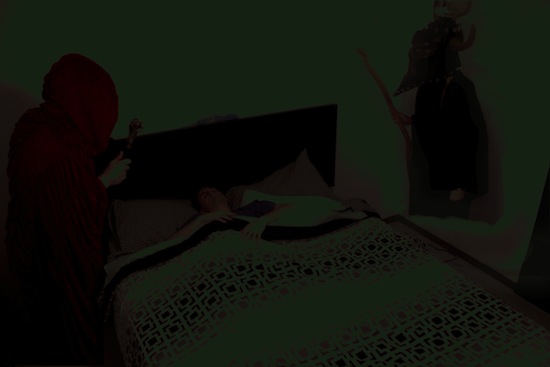 Though, perhaps, there is a profit to be made from these nightmares? I’ll let them live. For now.