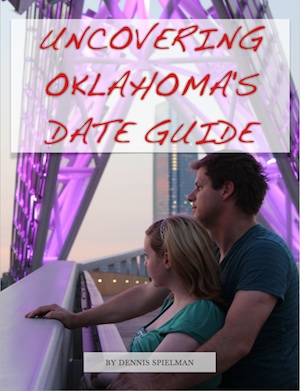 The Second Edition of Uncovering Oklahoma’s Date Guide book is now available! This edition is twice the size with 32 pages of places and over 50 ideas for dates – whether it’s a first date, a fun day out with other couples, or even an intimate, romantic date – the book has it covered.

The areas included are Oklahoma City, Bricktown, Norman, Edmond, and Arcadia, along with general ideas that can be done anywhere. Here’s a detailed list of what’s new:

The third edition, which I tentatively set for September 18, will include Tulsa. I will be visiting the Tulsa area throughout the summer.

I will also be working on getting The Crashing of Heaven and Hell released (also tentatively set for early September). All’s that’s left is to get a book cover, a proofread by an editor, and film a book trailer.

In July the goal is to film prequel videos for The Time Traveling Troupe and hopefully in August film an actual show. Raychel Winstead, Kyle Brower, and I held a meeting at Big Truck Tacos and decided to put on an impressive, over-the-top one night show. The show should would be like three episodes with an over arching plot. We’re still working out the details, including the date, but we’ll more and likely partner with OKC Improv.

In September, I want to film a horror movie in a “found footage” style of to be released in October. I’m still working out the script, but it’s going to be a prequel for another book of mine, Too Close to the Ground, that I’ve been working on and off since high school. This book is planned to be released in either November or December.

As you can see, I have a full plate for this year. I even have projects planned for 2013. Keep up-to-date with the “Subscribe via Email” box to the right.

The Crashing of Heaven and HellThe Time Traveling TroupeUncovering Oklahoma