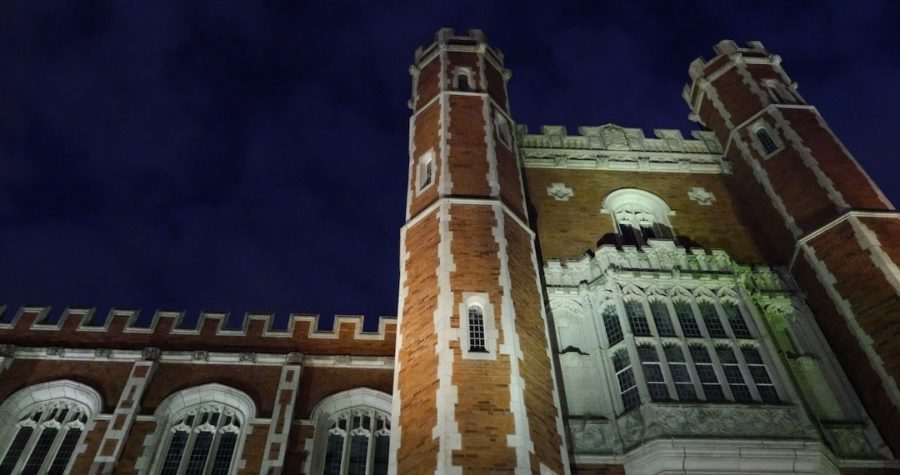 With Sam recovering from the flu, Geoff took the University of Oklahoma Ghost Tour and recalled the ghost stories to Sam. The tour included tales about Holmberg Hall, where a music professor is said to play in the night, footsteps on the glass-plated floors of the library decks, a little boy roller-skating through the third floor of Ellison Hall, and Mex the Dog still cheering for the football team.

If you love what we’re doing, want us to keep being artist owned and patron supported, click here. In return, you can get bonus content, including early access to other shows I produce.

Thank you for listening to Tales Unveiled! We would love it if you would leave a rating and review of the show on your favorite podcast provider. Your reviews do help other people discover the show and get noticed by the providers for possible collection features.

Behind the Scenes Commentary (Spoilers)

Doing an episode about OU’s ghost stories has been a back-up plan for us. Since Jeff himself would be the person Sam and Geoff would interview, we’ve put the episode off. With some interviews falling through and with me getting hit with the flu last week, I decided to do this episode to keep our weekly schedule. I came up with the story plot device of having the professor go on the OU ghost tour and recall the stories to Sam, who missed the tour because he was sick. I also came up with an idea where we could “call Jeff” for additional questions, but we ended up not doing that.

One of the things I’ve noticed in this episode when reflecting back on our first season was how much more back and forth Sam and Geoff have with each other. This episode isn’t all Geoff talking but has Sam asking questions and making comments. I really like that element.

This episode only covers a few of the stories Jeff himself shares on the tour as well as a bonus story about Mex the Dog. Fun Fact: I did an episode about Jeff’s OU ghost tours on Uncovering Oklahoma years ago. The photo used to represent the episode was a still frame captured from that tour.