How To Doc Your Mentary (feat. Distict Up!)

Back in November, I was interviewed by Brian and Kelly of the Okie Show Show podcast. The series dives into the finer details of Oklahoma’s film and music industries and now the episode with me has been released! Their description of it:

“Weeeeeeee’re back! With a whole new year and a whole new episode. Kelly and Brian sit down with Dennis Spielman to talk his new documentary “District Up!”, the many glories of Oklahoma, and a blind person gets some interesting descriptions.”

Brain and Kelly are awesome hosts. As with their show’s format, we went in-depth about story structure, camera equipment, and making documentaries. We also played some improv games in which I secretly try to kill Brian. Go check it out!

To wrap this up, here’s one of Prairie Dog Pictures award-winning short films.

Time for my annual End of the Year Reflection. Warning: If you don’t want to read someone saying nice things about 2016, don’t read further. 😉

This year was, by far, my most productive year.

My personal growth was fantastic. It’s kind of a funny too. When writing this post, I looked back on my past yearly reflections and in My Review of 2014 I felt good about making five videos throughout that whole year and now, in 2016, I made that much in one month! Crazy.

Let’s crunch some numbers on what I’ve made!

The one thing I didn’t do was publish any new books this year, however, there were hours of videos.

As for personal adventures this year, my wife and I took our first cruise, starting in Tampa, Florida then visiting the Cayman Islands and Cozumel, Mexico. We also took a road trip from Oklahoma to Georgia to visit my family for Christmas. Visited a bunch of sights in Oklahoma, of course.

My Favorite Accomplishments
My favorite accomplishment this year, no questions, was my feature-length documentary, District Up. I spent over a year making it. I grew in ways that have elevated my skills and defined my style as a filmmaker.

The first video I did for Uncovering Oklahoma this year was about the Norman Music Festival. I wrote here my journey of having shot a totally different interview, but I scrapped it to go into a different direction, which, to this day, I’m so glad I did.

My videos on the Paseo Arts District, Half a Day with the Halfrican American, and Downtown in December were also some of my best travel videos.

I made a music video, Friction by The Happily Entitled, this year! And it was awesome. The band later did a remix music video, which you can watch here, and they did a callback to my music video with them, which I thought was really sweet. (The scene I’m referred to was how the lead singer was wrapped in the blanket.) I would love to do more music videos next year.

I participated in the 48 Hour Film Project for the first this year, making the short film, Guilt Trip. While it didn’t win any awards, we all had a blast and I made new friends.

I started a horror/comedy short film series, Quarter Minutes, working with people from our 48 Hour Project and those who wished they could’ve joined. Quarter Minutes pierces through the multiverse to capture 15-second glimpses of strange and seemly normal oddities of multiple realities. We managed to make 10 stories this year and plan to more next year.

There were some videos I felt “meh” about, but on those, I still learned things. You learn best from doing.

My Top 17 Most Played Songs in 2016
These were my most played songs in 2016 according to Spotify. Keep in mind I will often put a song on repeat when writing or being creative for inspiration. 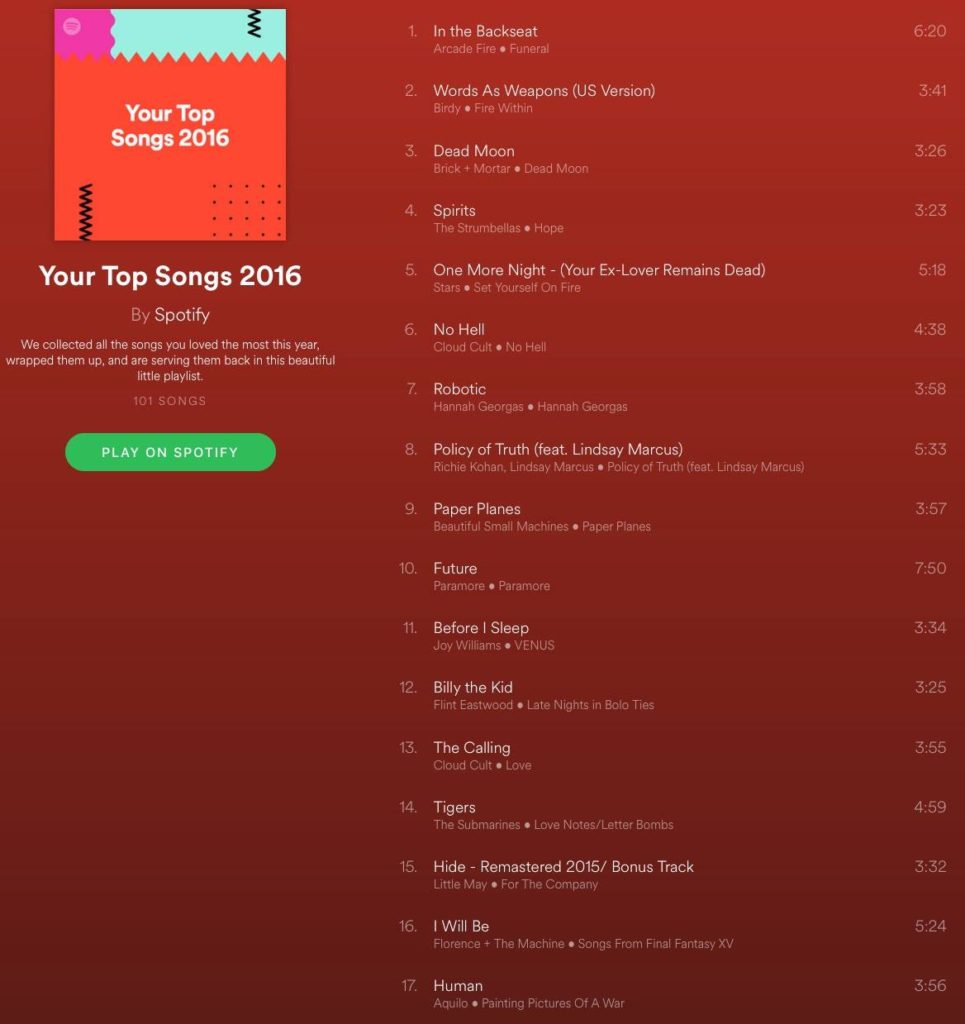 As usual, I’m not one for talking about future projects here until they’re close to being ready, especially when they’re in the early planning stages. I’ve been meeting with friends and professional colleagues to discuss plans for 2017. I have ideas for some new shows. For one of the shows, I think it would be neat to have a studio audience because there’s nothing like that in Oklahoma.

I will release a new book from the 16th Phoenix Universe of Stories! Maybe two. Maybe three.

I am writing scripts for a fictional mini-series.

I am researching subjects for possible feature-length documentaries.

New videos will continue with Uncovering Oklahoma. I am working on stepping up my game.

Anyway, that’s a sneak peek of what I have planned for 2017.

I have accomplished more this year than I have my whole life and I must give thanks to my wonderful and supportive wife, Leslie, who helped made everything possible! I’m excited for what will happen next year.

The Plaza District, Film Row, and Western Avenue. Each of these Oklahoma City districts may have a unique history and aesthetic, but they also have something in common: over the past few years they all have experienced a revival with the creation of regular events that bring businesses, neighbors, and “outsiders” together. District Up! is a feature-length documentary that shares stories and advice on district revitalization throughout Oklahoma City from the people who helped create positive change in their communities and want to inspire others to do the same.

Director’s Statement
When I started Uncovering Oklahoma, the main mission was to show people there were interesting and fun things to do in Oklahoma. However, there has always been a secondary mission to make Oklahoma more interesting. District Up! is the first major project to not only help make Oklahoma more lively but other communities as well with stories and advice from those who helped create positive change.

After over a year of working on the documentary, I’m proud to release it to the public. The movie made its first public appearance at the deadCenter Film Festival to a packed venue. After receiving feedback from the festival, I continued to work on the movie, adding more interviews, filming more events, and showcasing more people while improving the message and pacing of the film.

For this project, I wanted to focus on positive changes in business districts and community events. There are many aspects, subjects, and stories to share on city revitalization. Truth be told, all the stories could make like a 10-part documentary series, given the time and finances.

I hope after watching District Up! people feel inspired to travel and make great things.

Happy Friday! I have a bit of a stack of things to talk about, which was not my intention to overlap sessions and I apologize for it.

During last weekend, I lead a team in participation in the Oklahoma City 48 Hour Film Project with Tiffany Gibson, Kristy Boone, Katie Kochelek, Josh Shriner, and Cassondra Darling. The event describes itself as, “a wild and sleepless weekend in which you and a team make a movie – write, shoot, edit and score it – in just 48 hours! The film we made, Guilt Trip, deals with a getaway for two sisters soon comes crashing into reality, as one is forced to deal with her mistakes. You can watch the trailer for it above. 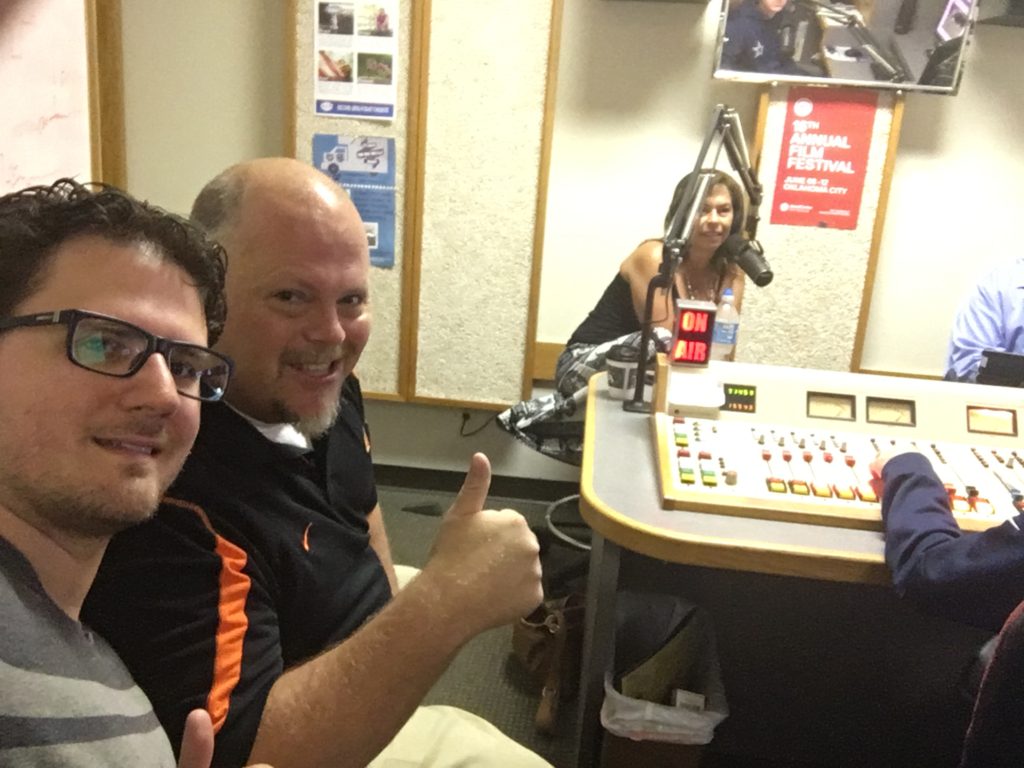 This morning I was on Mitchell in the Morning (News Talk 1520 KOKC) to talk the 48 Hour Film Project along with Ben Hlavaty, who runs the Oklahoma City edition. 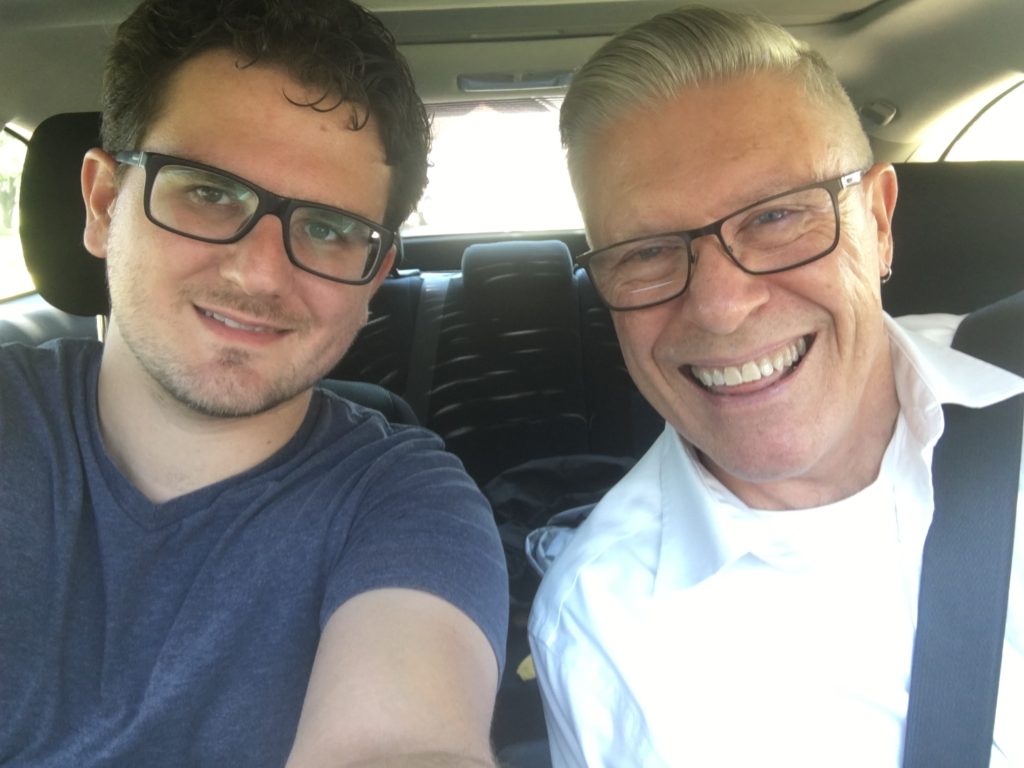 Also released today was my podcast session with Brett Dickerson for his show, Intersections. We also talk about the 48 Hour Film Project too, but we go more in-depth about it and also discuss my Summer Fun movie, District Up!, my books, and two of our mutural favorite movies.

I didn’t intend to stack my interviews like that today so I apologize to everyone.

Come see Guilt Trip along with 30 other fantastic local films this Sunday at the Oklahoma City Farmers Public Market (311 S Klein Ave, Oklahoma City 73108). Tickets are $10 in advance and $15 at the door. There’s a ton of shorts I personally am interested in seeing there so I know it’s going to be great.

The Plaza District, Film Row, Western Avenue, and H&8th. Each of these Oklahoma City districts may have a unique history and aesthetic, but they also have something in common: over the past few years they all have experienced a revival with the creation of regular events that bring businesses, neighbors, and “outsiders” together. This feature-length documentary shares stories and advice on district revitalization throughout Oklahoma City from the people who helped create positive change in their communities and want to inspire others to do the same.

District Up! made its World Premiere at the deadCenter Film Festival! Showtime was Friday, June 10 at 8:00pm at The District House in the Plaza District in connection with their monthly LIVE on the Plaza event.

I had a fantastic and crazy busy week! I’m going to skip the preparation matters and start talking about the Thursday Opening Night Party. I did my 30 Second videos with filmmakers again this year. (For the recap on those, click here.) This was my first year to attend deadCenter as having Uncovering Oklahoma as my main job (instead of my side job) and as a filmmaker. Double Special! 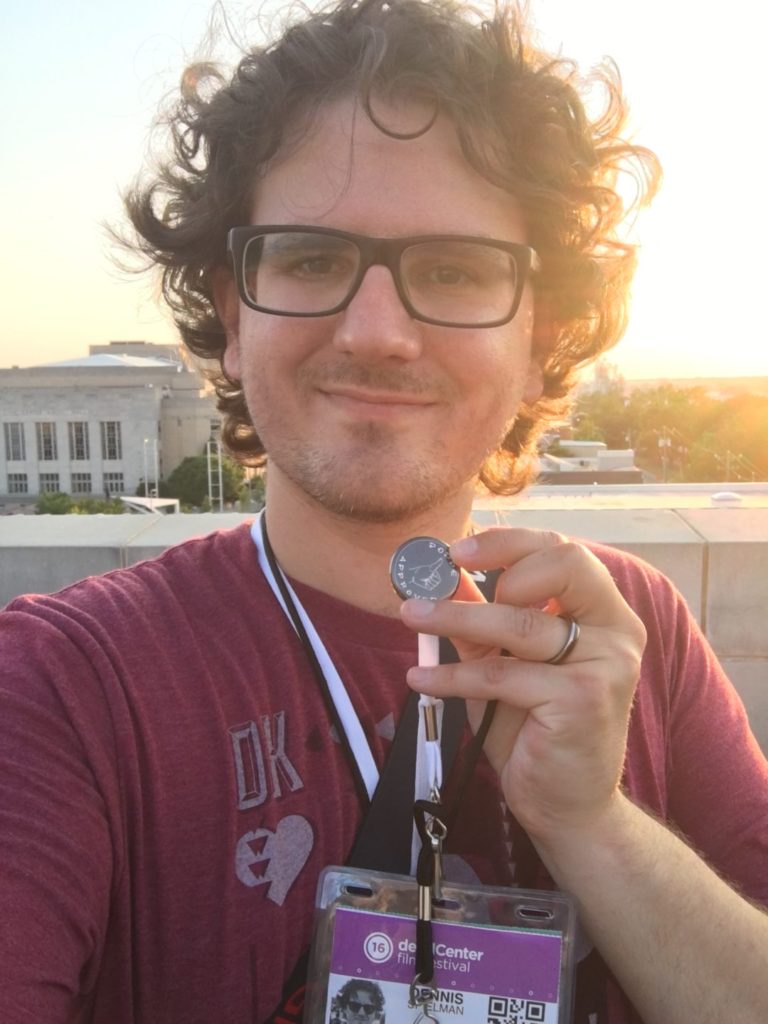 Friday morning, I attended the filmmakers breakfast, meet with distributors, listened to discussion panels, filmed more 30 second videos, had lunch, and visited the art films at Current Studio before I had to ready for my movie’s premiere.

I was ecstatic with all of the love District Up! was getting on Twitter on Friday:

.@deadcenter comes to @LIVEonthePlaza TONIGHT! Can't wait to check out "District Up!" https://t.co/6xbUv7RpV8

And the love during the movie as well!

We just keep adding more chairs to the premier of "District Up!" Congrats, @uncoveringok! Thanks again @plazadistrict and @deadcenter!

Q&A time with @deadcenter after the film, and we're loving it! pic.twitter.com/9fgh0KfE7E 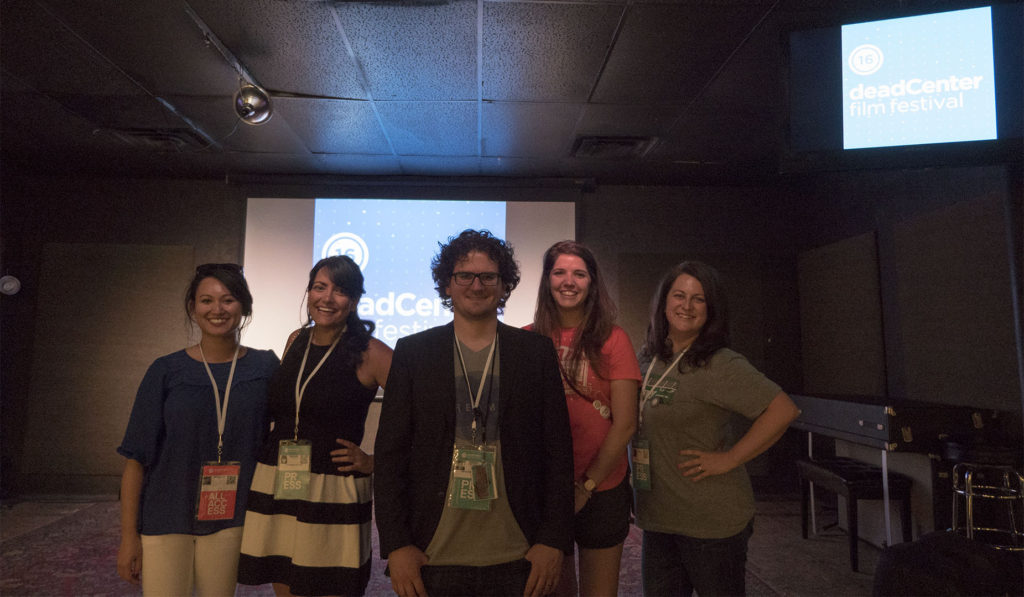 Everything went great! We had to keep adding more chairs as the audience grew! There was also a group from the University of Oklahoma with a table setup with my film about urban planning that I wish I had known about in advance so I could’ve promoted them too. 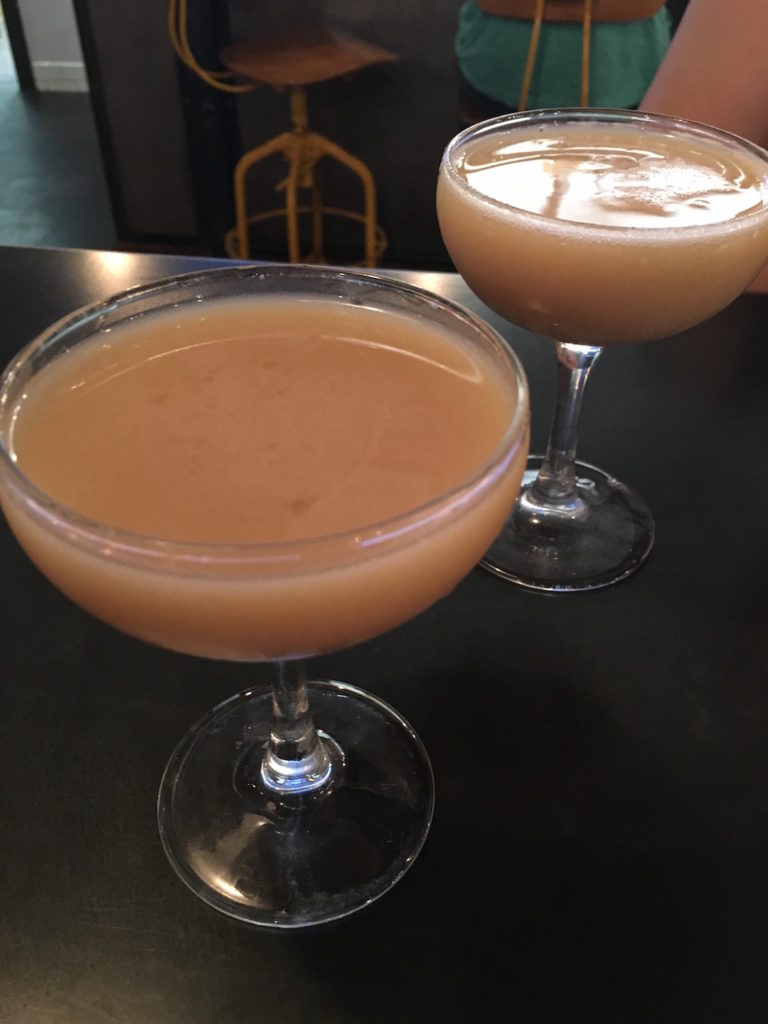 I want to give special thanks to Oak & Ore for making my wife and I a special “District Up!” cocktail after the film. It was so good! I got to brag to everyone about having a cocktail themed after my movie.

The whole deadCenter weekend has been a rewarding experience. If you’re a festival volunteer reading this, thank you for your help and hard work.

With deadCenter over, what does the future hold? The movie has been only submitted to a few other film festivals, as the submission process is expensive. I have gotten some feedback and some ideas for the final retail cut of the movie, which I’m planning on releasing in October/November in conjunction with a book that goes into more details. I have gotten some ideas for other documentaries so I’ll be exploring those stories. On Sunday night, I did start to write a screenplay.

Whatever happens, I’ll write about it here.